Gaudi was a Catalonian born Spanish architect and is most famous for his works in Barcelona. Gaudi’s style was very distinctive and his designs were very advanced for the time using references to nature in much of his work. religion was also a key factor for Gaudi and evidence of this can be seen in his extremely detailed designs for his cathedral, the Sagrada Familia. Gaudi’s work was very influential in the Spanish ‘Modernisme’ design movement which became the Spanish equivalent to ‘Art Nouveau’.

This wonderful building has been under construction for 136 years and is not due to be completed until 2026. The project will be completed to mark the 100 year anniversary of the Gaudi’s death.

The detail in this building and in this facade particularly is mind blowing. The facade depicts scenes from the nativity. I have since read a lot more about this building in a book I bought called “The Basilica Of The Sagrada Familia” (the Visual Edition)  by Dosde Publishing which is very detailed and explains all elements of the building in great detail. 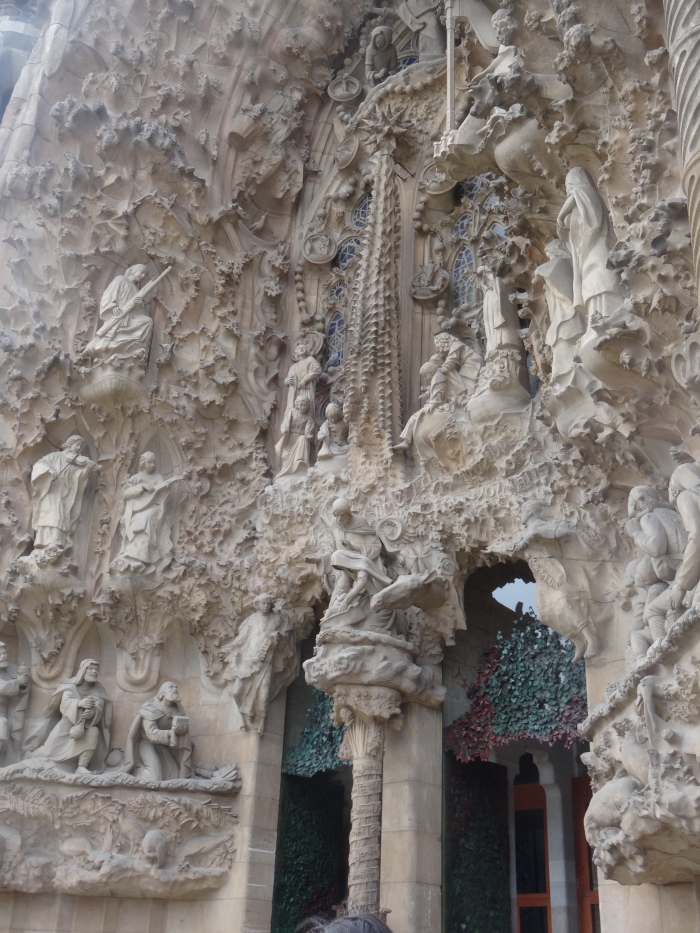 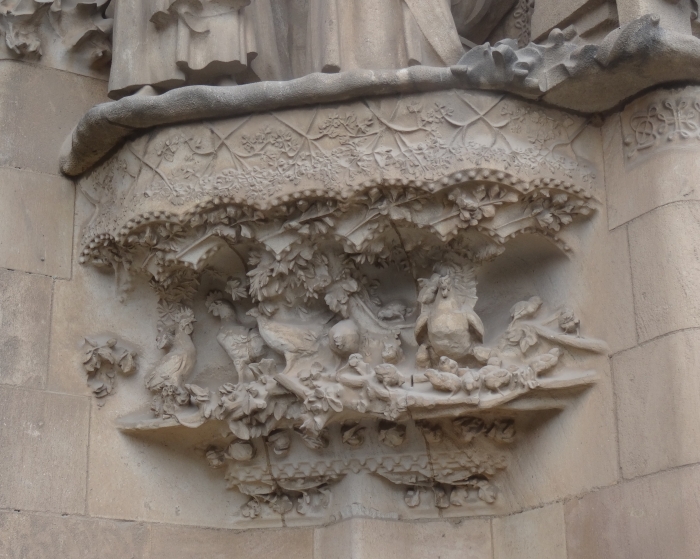 Pictures from the Cathedral’s interior below 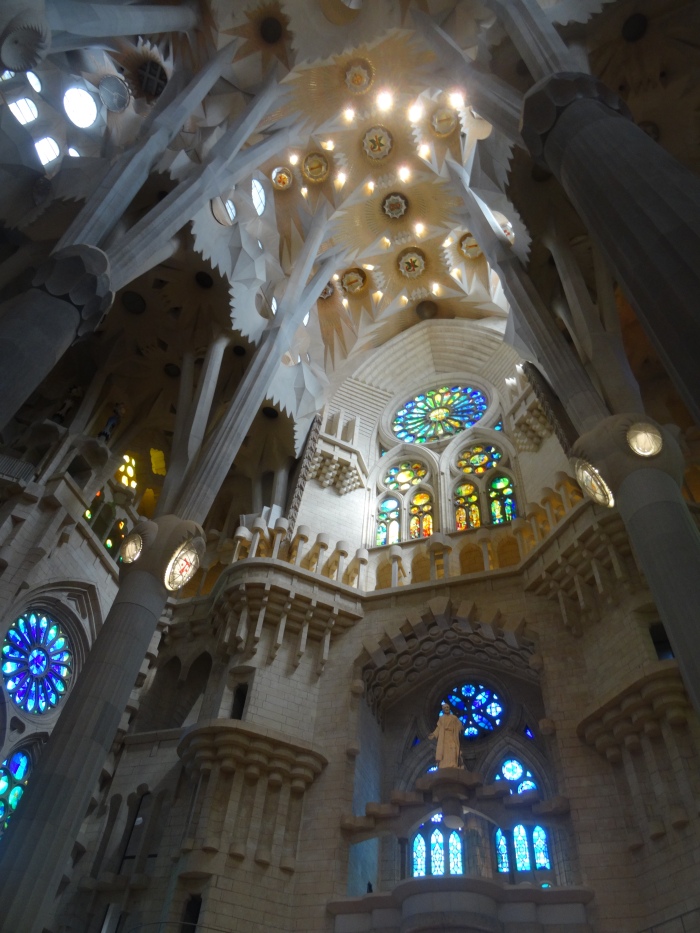 The vaults that you can see in this column enabled Gaudi to build this building without the traditional method of buttresses. These vaults provide support for the building and also an interesting interior space designed to look like a forest. You can see in this picture that the vaults divide and multiply just like tree branches.

The helmets upon the above figures (the Soldiers) remind me very much of some of the chimneys designed for the Casa Mila (a private residence designed by Gaudi), I have since read in the book about the Sagrada Familia (mentioned above) That the inspiration did in fact come from those chimneys and was also done so in homage to Gaudi. 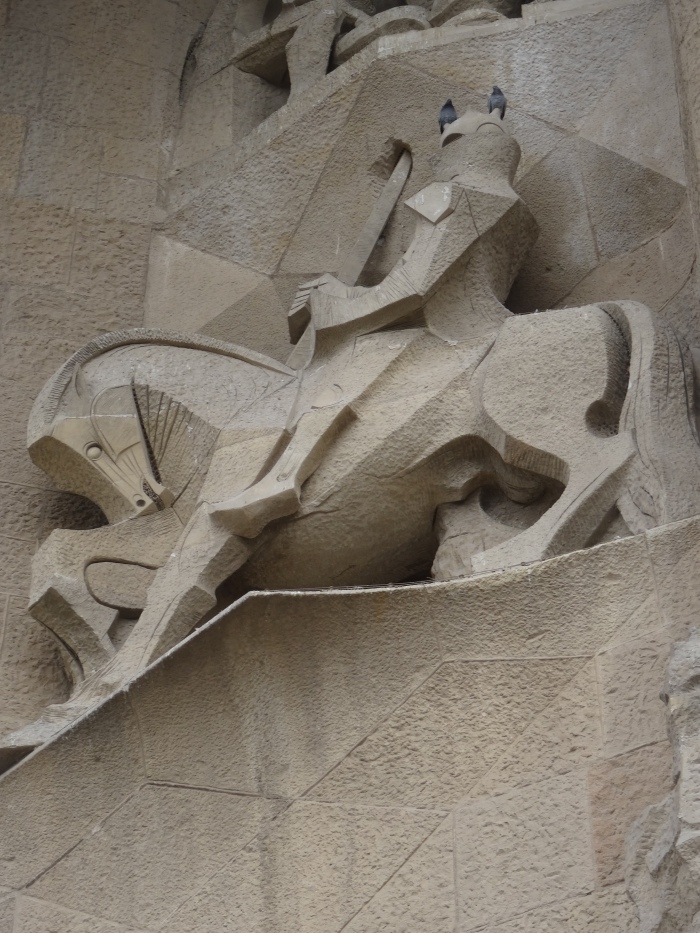 These hard lined sculptures on the passion facade are very different to the shapes on the other facades. I found out in the museum that the passion facade is all about the crucifixion of Jesus. The blunt, harsh lines of all of the sculpture work on this facade was designed to depict the mourning and suffering caused by these events. 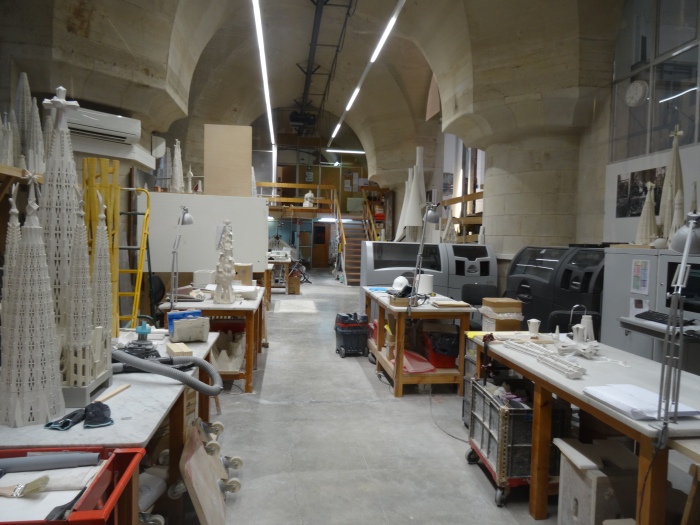 Workshop of the Sagrada Familia 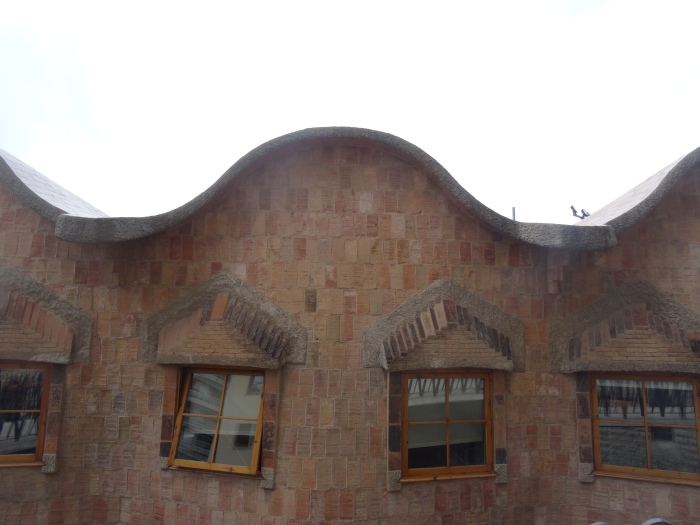 The School building, set in the grounds of the Sagrada Familia, designed by Gaudi for local children and children of the cathedral’s workers. 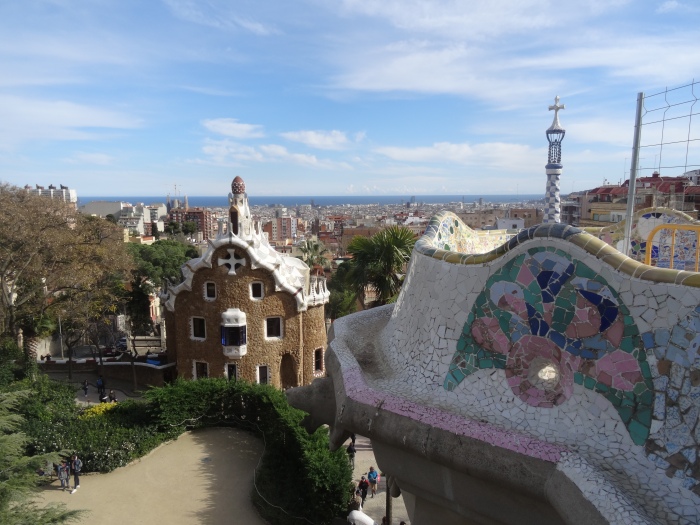 Gaudi was commissioned by his good friend Eusebi Guell to design the park and the individual residences that were due to be built here.

The land was bought by Guell and his intention was to build a community for the wealthy of Barcelona in a natural setting outside of the city. Designs for the park were based upon the idea of the English garden cities, whereby people could escape the urban city life and live in a more natural environment. 60 plots were due to be built in this parkland setting. The development was eventually stopped by Guell in 1914 for a number of reasons, largely due to Guell’s strict restrictions on the site. The main being that he would not allow public transport into the park which made the park very difficult to access, and put people off buying plots on the site. The park remained as it is today and upon Guell’s death was bought by Barcelona council and opened up as a wonderful public space that is now a UNESCO World heritage site. 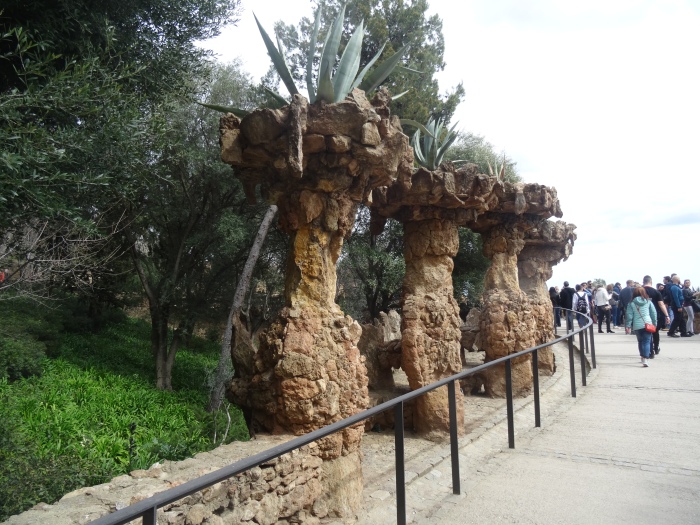 Some pictures taken from the park’s outskirts

This was the home of Eusebi Guell and was the only property already on the land when it was bought by Guell in 1885.

The two buildings above are the only designed by Gaudi, the porters lodge (left) and the administration building for the site (right)

The two buildings above are the only two are the only plots that were sold, neither were designed by Gaudi. The pink building on the left was eventually bought by Gaudi. He lived there with his niece and it is now a Gaudi museum. The house on the right was built on two of the park’s plots and it sits on the hillside on the outskirts of the park. It is privately owned and is still owned by the family that bought the original land. 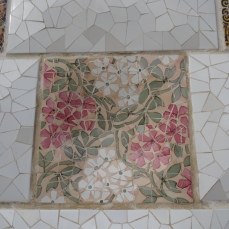 A few examples of the many details of this spectacular park 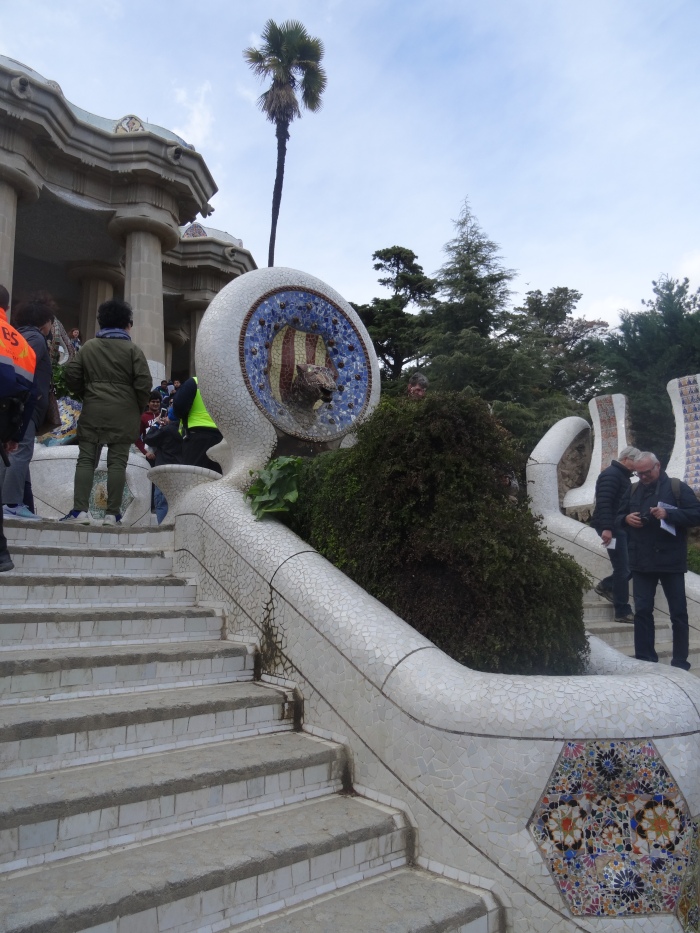 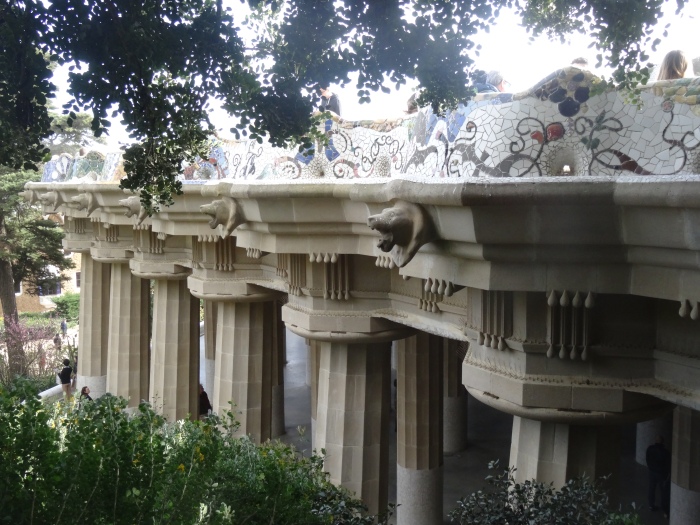 Perhaps the most glorious park of the park is the serpentine bench shown above and below in more detail. 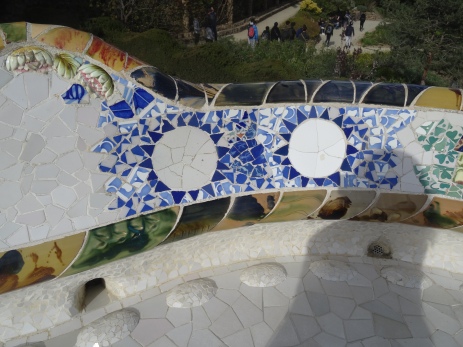 The detail in this incredible building is not only present on it’s rooftop, but from the very beginning with its entrance and continues up through all six floors until you reach the stunning finale. 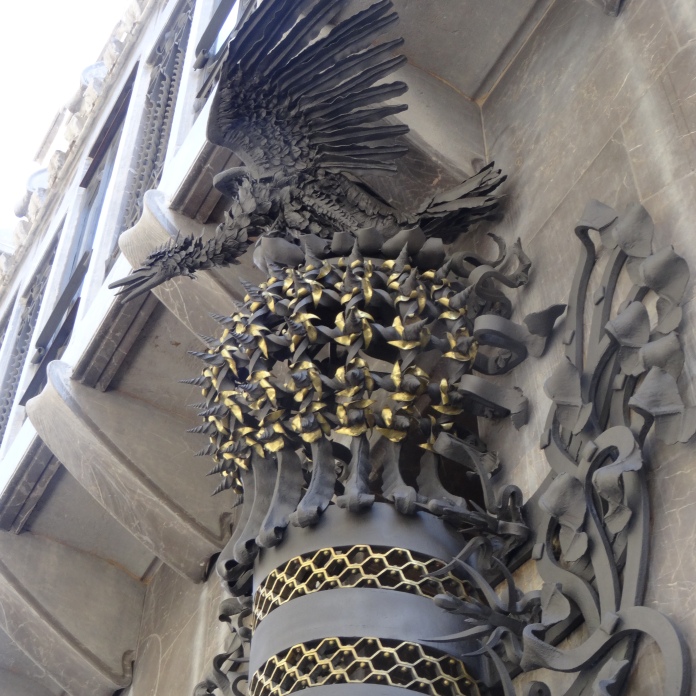 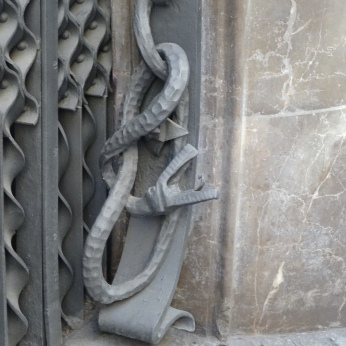 the above are all details that can be found at the buildings entrance. 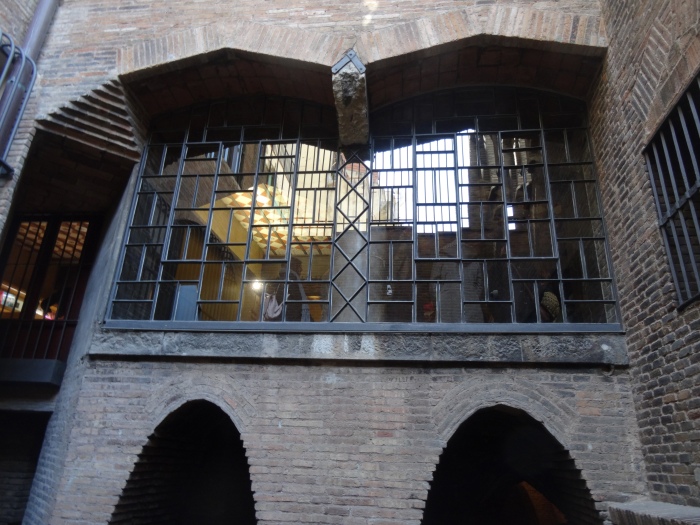 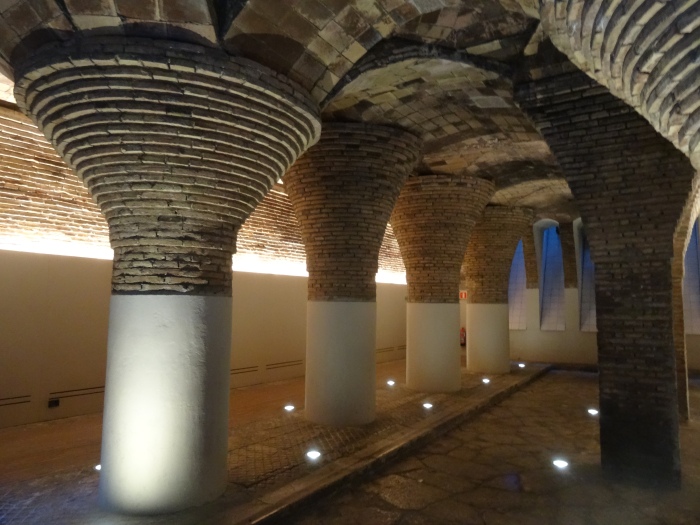 Even the stables are amazing. 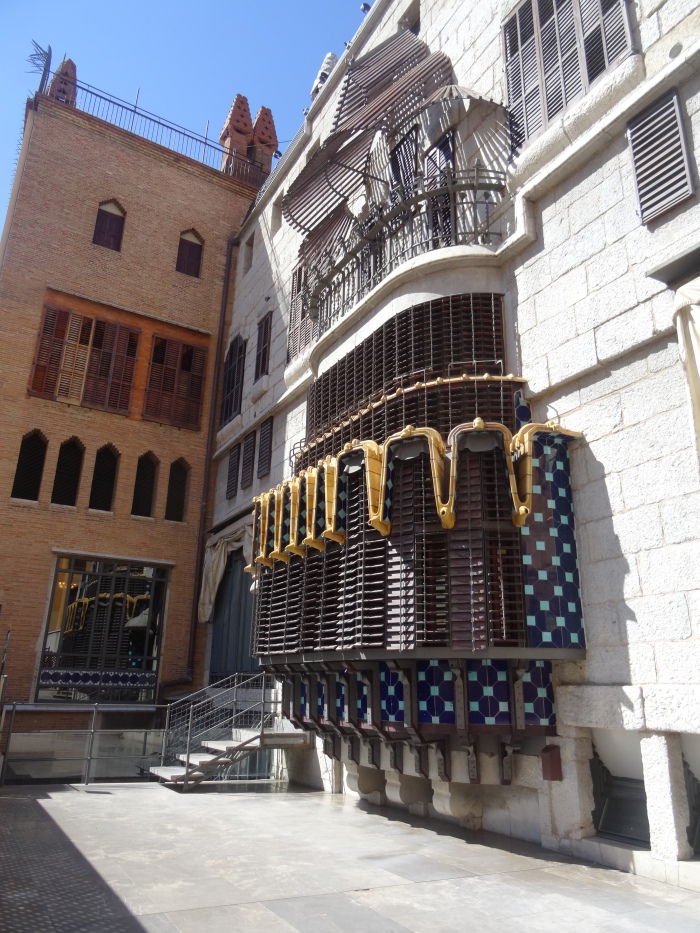 As we move up the building it only gets better. 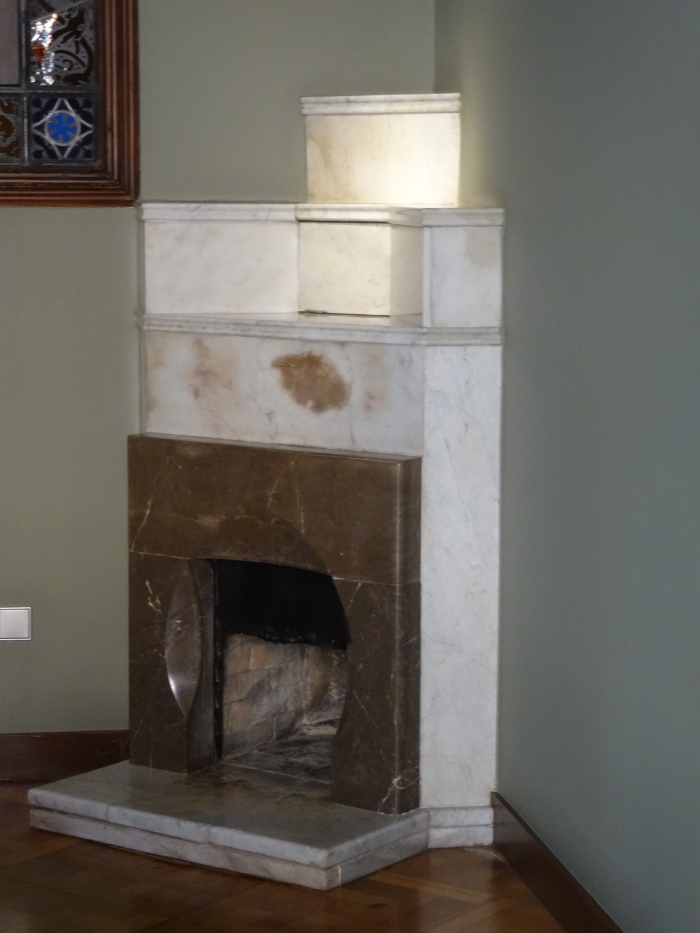 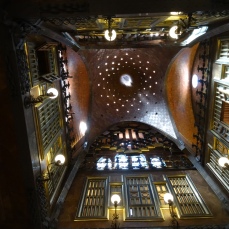